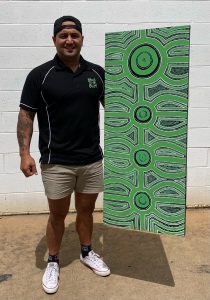 This painting represents the Boys to the Bush organisation held up by its core values; Engagement, Community & Resilience.

You will notice that everything is duplicated in threes. The circles are painted in threes and the lines leading into and away from the circles are all in threes. What this represents is us paying respect to where we’ve come from (the past) where we are now (the present) and where we aim to be moving forward (the future).

Some paths are more direct represented by the straight lines, where others paths and others journeys may take a little longer.

The repeated lines outside of the circles and between the paths represent the positive ‘Ripple Effect’ that Boys to the Bush has in the community, a young person’s family and ultimately the positive effect it has in a young person becoming the best version of themselves.

As the artist, I give permission for this artwork to be reproduced as part of the Boys to The Bush program under the direction of Boys to the Bush staff and leadership. Everyone’s view of Engagement, Community & Resilience is different however the core value remains the same.